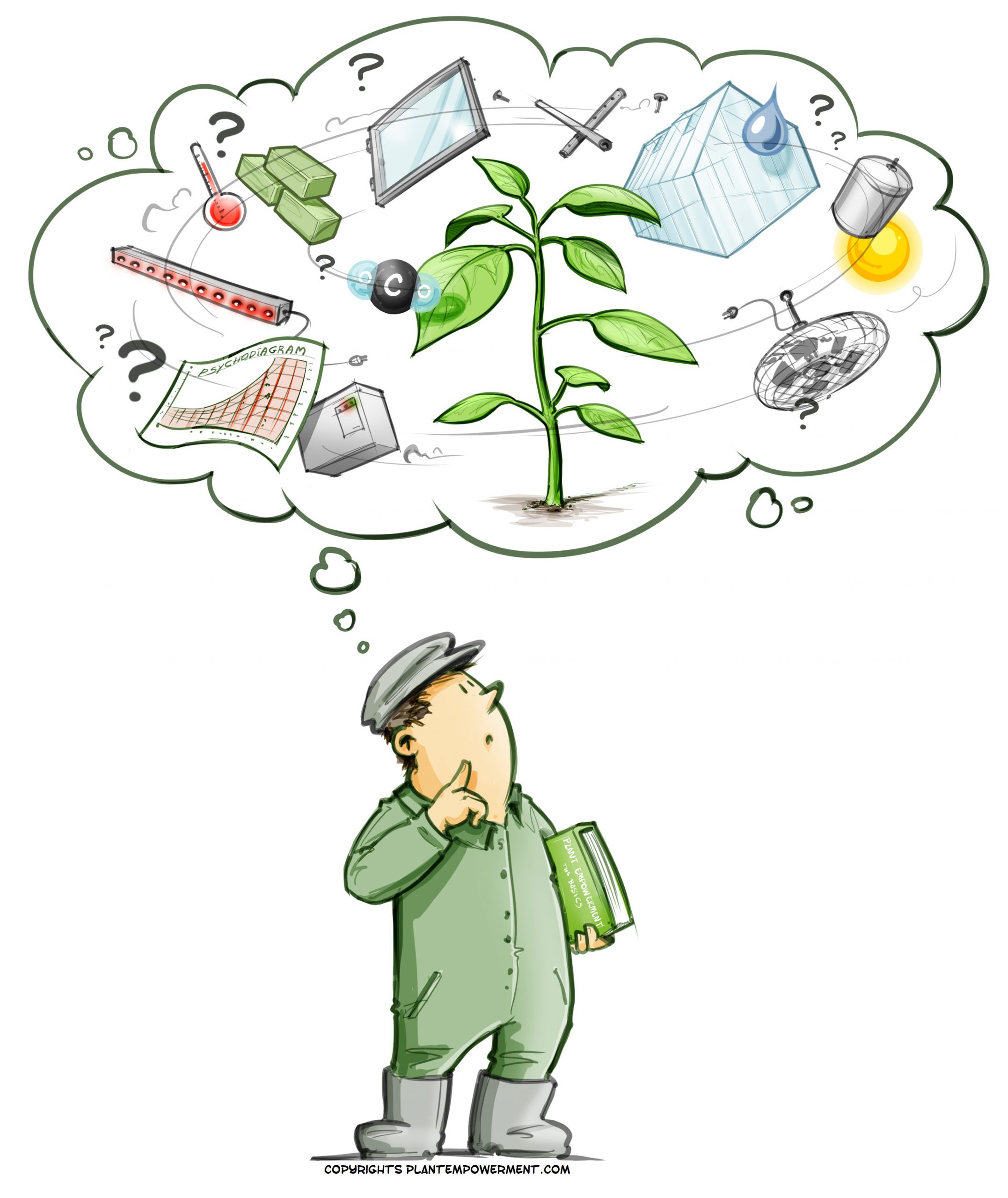 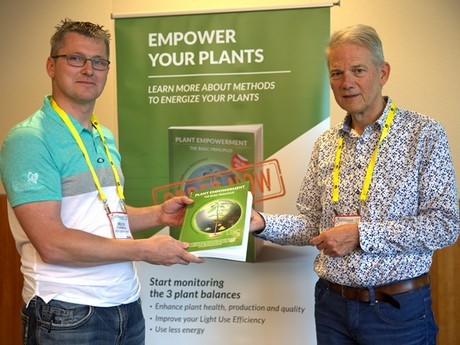 A diverse group of growers, production managers and associates from all sectors of horticulture gathered on Wednesday, October 3rd at the Canadian Greenhouse Conference in Niagara Falls for the official North American launch of the brand new book on Plant Empowerment. Author Jan Voogt represented fellow authors Peter Geelen and Peter van Weel, and started off the afternoon with an introductory lecture on the principles of Plant Empowerment.

After his interesting sneak preview, Jan Voogt presented the first signed copy of the book to Hilco Tamminga, owner of Truly Green Farms. Hilco was very pleased to receive the first copy: “It is an honour to receive the first book. We endorse the principles of Plant Empowerment. This theory helps us to grow better without forgetting the 3 Ps; People, Planet and Profit. With Plant Empowerment we can achieve all 3!” 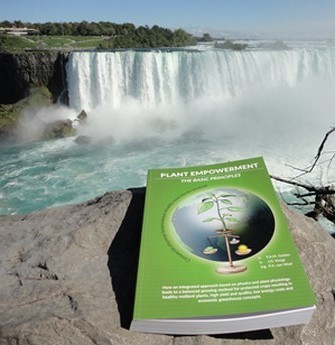 What if someone told you that plant physiology and physics could change the way you think about greenhouse climate control?

In their book Plant Empowerment: The Basic Principles, climate controls systems specialist Jan Voogt and his colleagues, former cut rose consultant Peter Geelen and former researcher at Wageningen University and Research (WUR) Peter van Weel, have pooled their knowledge and experience to show the interplay between climate conditions in the greenhouse. Filled with detailed information on applied theory and best practices, the underlying principle is the need for balance. Crops balanced in energy, water and assimilates are healthier, less vulnerable to diseases and pests, and more likely to produce higher yields and better quality. If the point of every plant process is to maintain balance, then a grower’s job is to …. 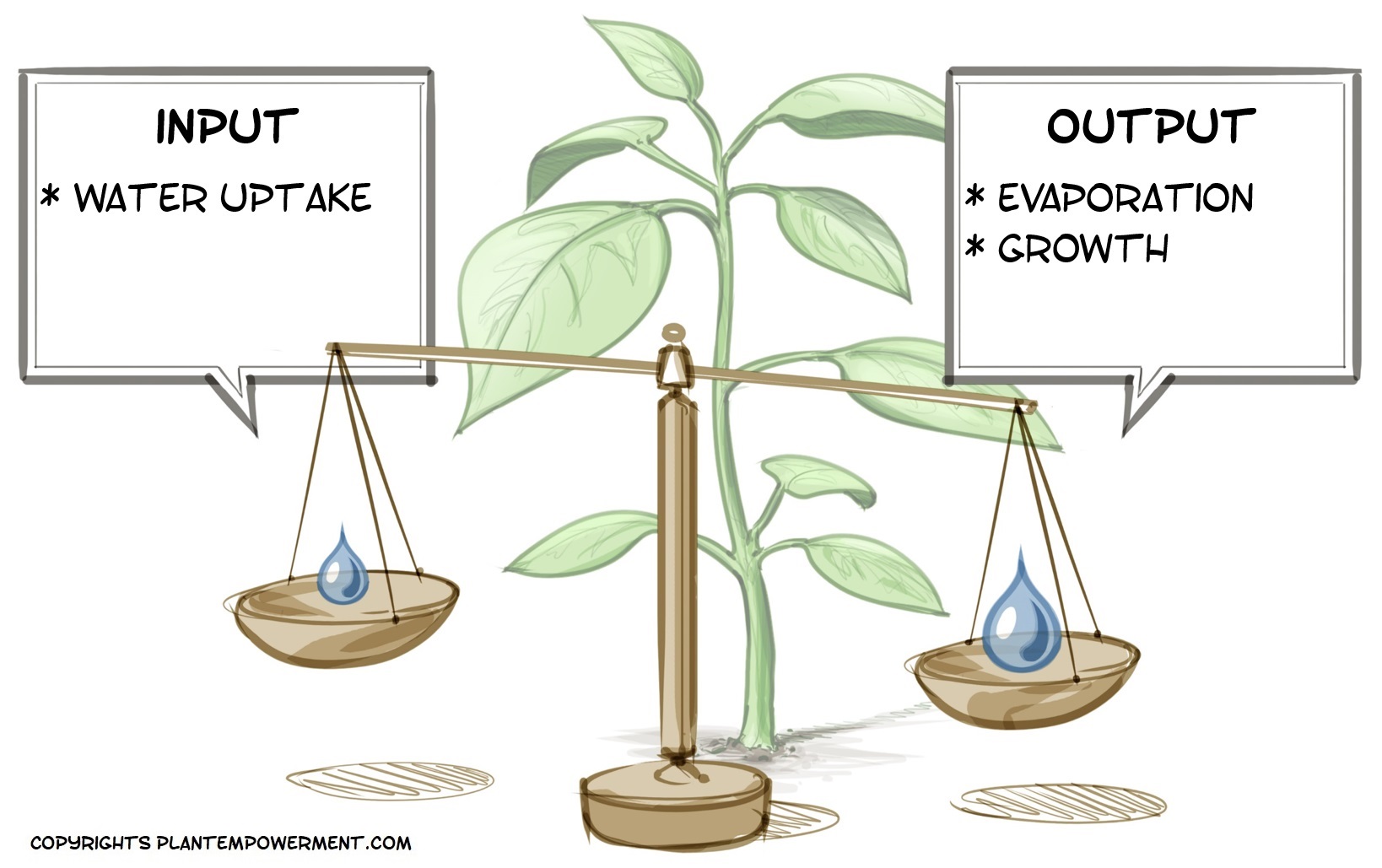 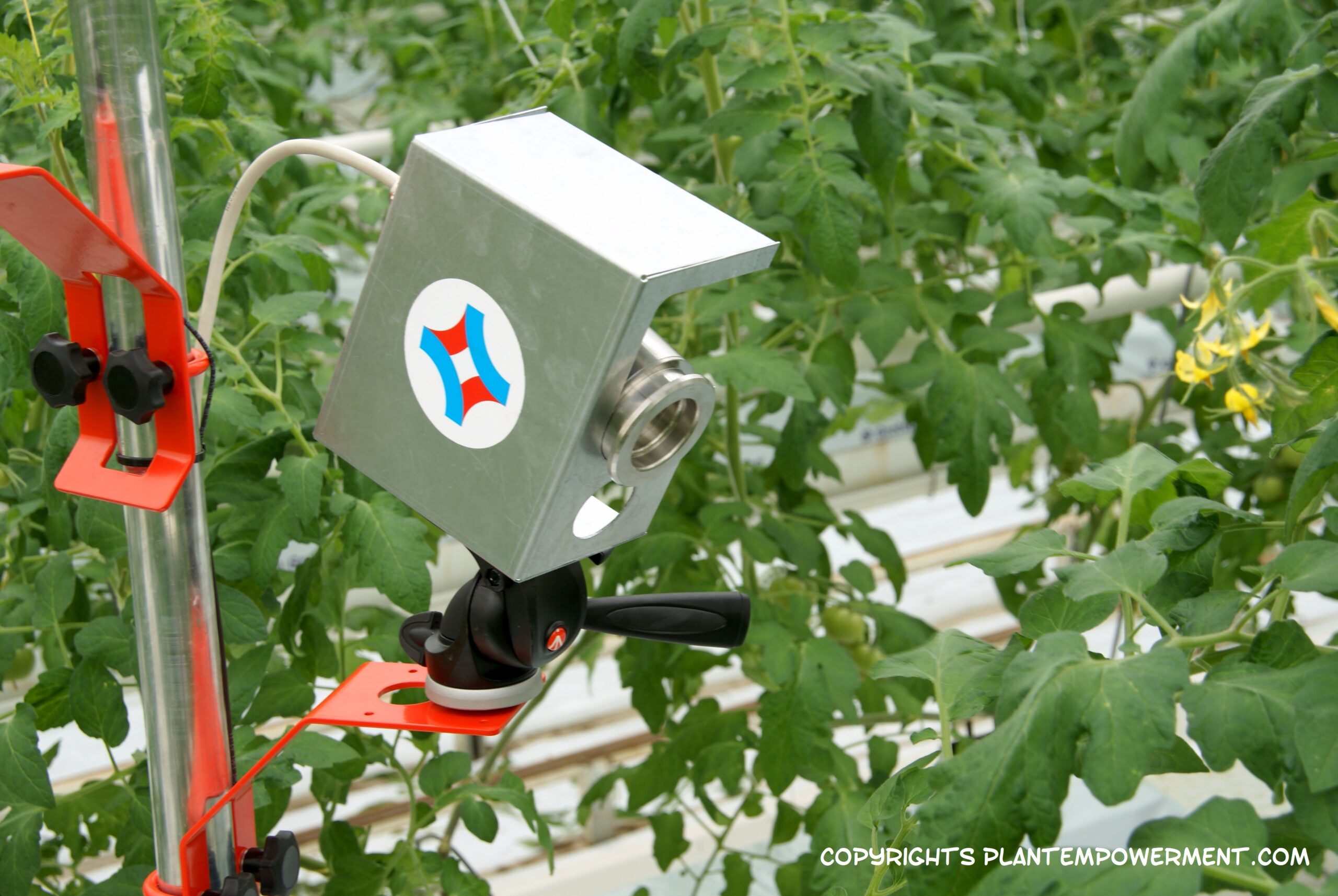 The goal of every greenhouse irrigation strategy should be to maintain water balance in the crop.

What is Plant Empowerment? Typically, traditional plant production methods are based on a mixture of blueprints, best practices, common knowledge of plant physiology, as well as the ‘green fingers’ and ‘emotional perception’ of growers. This approach has been successful but also has several limitations. The concept of ‘Growing by Plant Empowerment’ (GPE) brings experience and knowledge together in an integrated approach. Its starting point is the natural behaviour of plants relative to the greenhouse environment, as described by six balances concerning energy, water, CO2 and assimilates. Monitoring these balances with sensors, combined with crop measurements in a coherent framework based on physical and plant physiological knowledge and insights, provides hard facts required to control and improve the cultivation process. In this first article of a multi-part series, we’ll explore the importance of GPE in a greenhouse’s irrigation strategy.

Typically, an irrigation strategy consists of a mixture of different methods, based on clock times (such as start time, stop time, and time intervals), radiation intensity (W/m2) and light sum (J/cm2), the measured percentage of drainage water, water content or weight of the slab, and so forth. The goal of the irrigation strategy, however, should be ….

The article Empower plants by a well-balanced irrigation was published originally in the magazine Greenhouse Canada in March 2019. 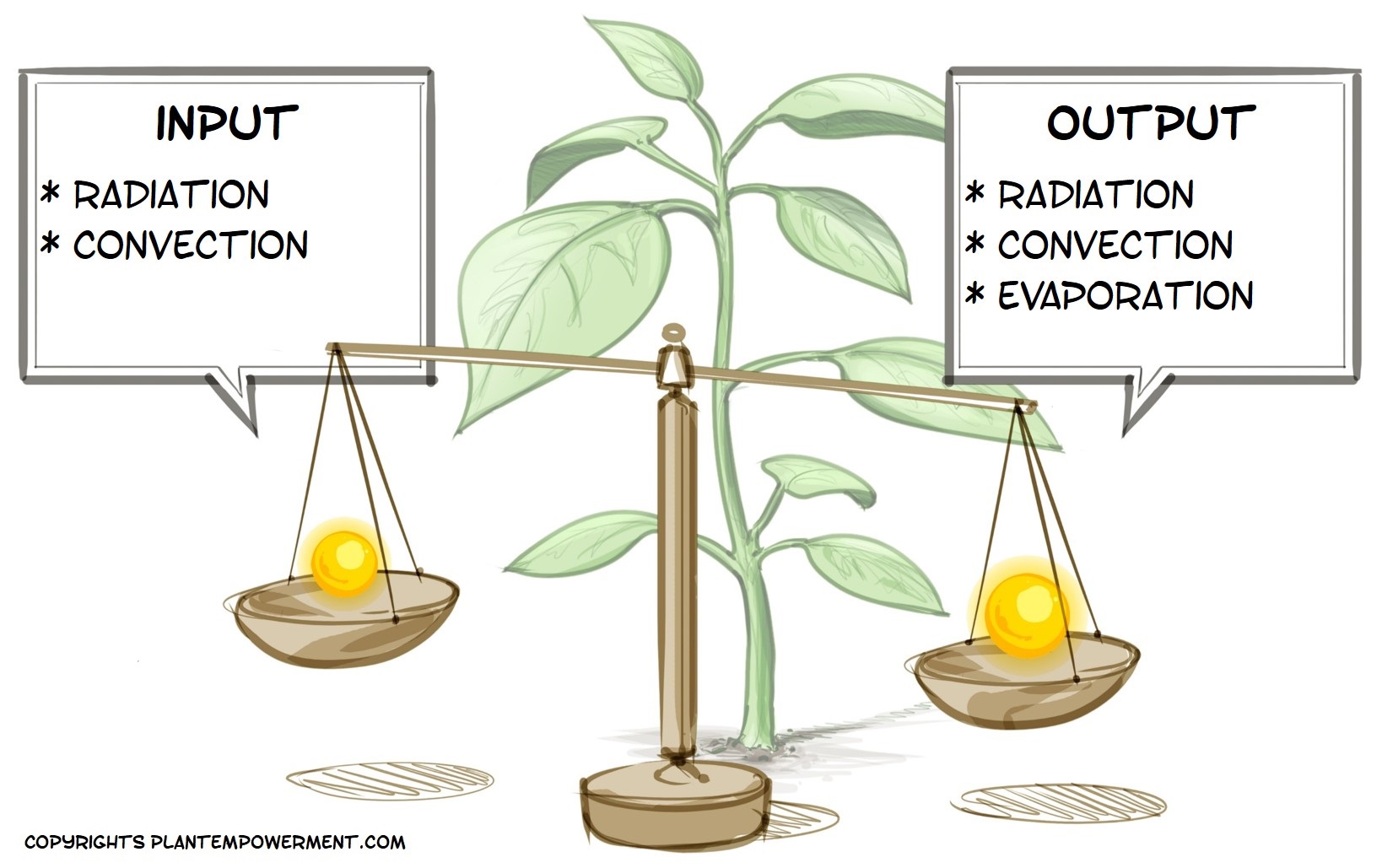 Rather than aiming for a preset greenhouse temperature, ventilation should be used to support the plant’s water and CO2 needs.

In January’s issue of Greenhouse Canada, readers were introduced to the concept of Growing by Plant Empowerment (GPE). Combining grower experience and knowledge of plant physiology, the goal of GPE is to optimize the behaviour of plants in the greenhouse environment by maintaining critical balances involving energy, water, CO2 and assimilates within the plant. These balances can be monitored by sensors, combined with crop measurements, and then interpreted in the context of plant physiology and physics to help finetune and improve the crop. In the first article of this multi-part series on GPE, the importance of a greenhouse’s irrigation strategy, in relation to the water balance of the plant, was explained (see March/April 2019 issue of Greenhouse Canada). In this second article, we will explore the importance of GPE in a greenhouse’s ventilation strategy, focusing on the relationship between ventilation and plant evaporation, and eventually how a well-balanced ventilation strategy can promote photosynthesis and light use efficiency (LUE).

Typically, a ventilation strategy consists of a mixture of different methods. First, there may be a minimum window opening needed to avoid a build-up of adverse gases like NOx, ethylene, etc. The release of moisture may be another reason to increase the angle of the window opening, which also depends on weather conditions. Typically, the main driver for large window openings is temperature control. It is often believed that temperature is the key to plant development and that a too-high temperature reading must be avoided at all times. The ultimate goal of the ventilation strategy, however, …

The article Empower plants by a well-balanced ventilation was published originally in the magazine Greenhouse Canada in June 2019.

Day or night – how to promote a crop’s self-cooling strategies and improve temperature uniformity under a blackout screen.

The sun can bring 800 Watts per m2 inside a greenhouse. That is a huge amount of energy, especially considering the total size of greenhouses nowadays. For a 10-ha greenhouse, that equates to 80,000 kW! However, only two per cent is converted by the crop canopy for growth, the other 98 per cent will leave the greenhouse. In that sense, plant production is not very energy efficient. What is true for sunlight is also true for expensive artificial light, however, lamps bring less energy into the greenhouse. For example, to produce 200 μmol/m²·s, high-pressure sodium lamps bring in 114 W/m2 of energy, while LED lamps bring in 74 W/m2. When LED fixtures are water-cooled, this energy is reduced to 48 W/m2. What consequences does this have for the crop and the greenhouse when most of this energy must be released again? This article explains the important role of energy balances in a greenhouse and how we can support the crop and the greenhouse in getting rid of these huge amounts of energy.

WHAT IS ENERGY BALANCE?

Greenhouse production is bound to the rules of physics, and one of the most important rules is that energy never ‘disappears’ but is usually converted into different types of energy. For a greenhouse, energy input and output are always in balance. (For more, refer to the first article of this series in Greenhouse Canada, Mar/Apr 2019). The amount of energy absorbed by the plant is less than the energy entering the greenhouse, as part of the radiation is reflected. The plant can actually control that reflection by turning its leaves or by changing the shine of the leaf. The amount of energy absorbed by the canopy can be measured with a device known as a net radiometer. It measures light energy that …

The article Empower plants through well-balanced climate control was published originally in the magazine Greenhouse Canada in October 2019. 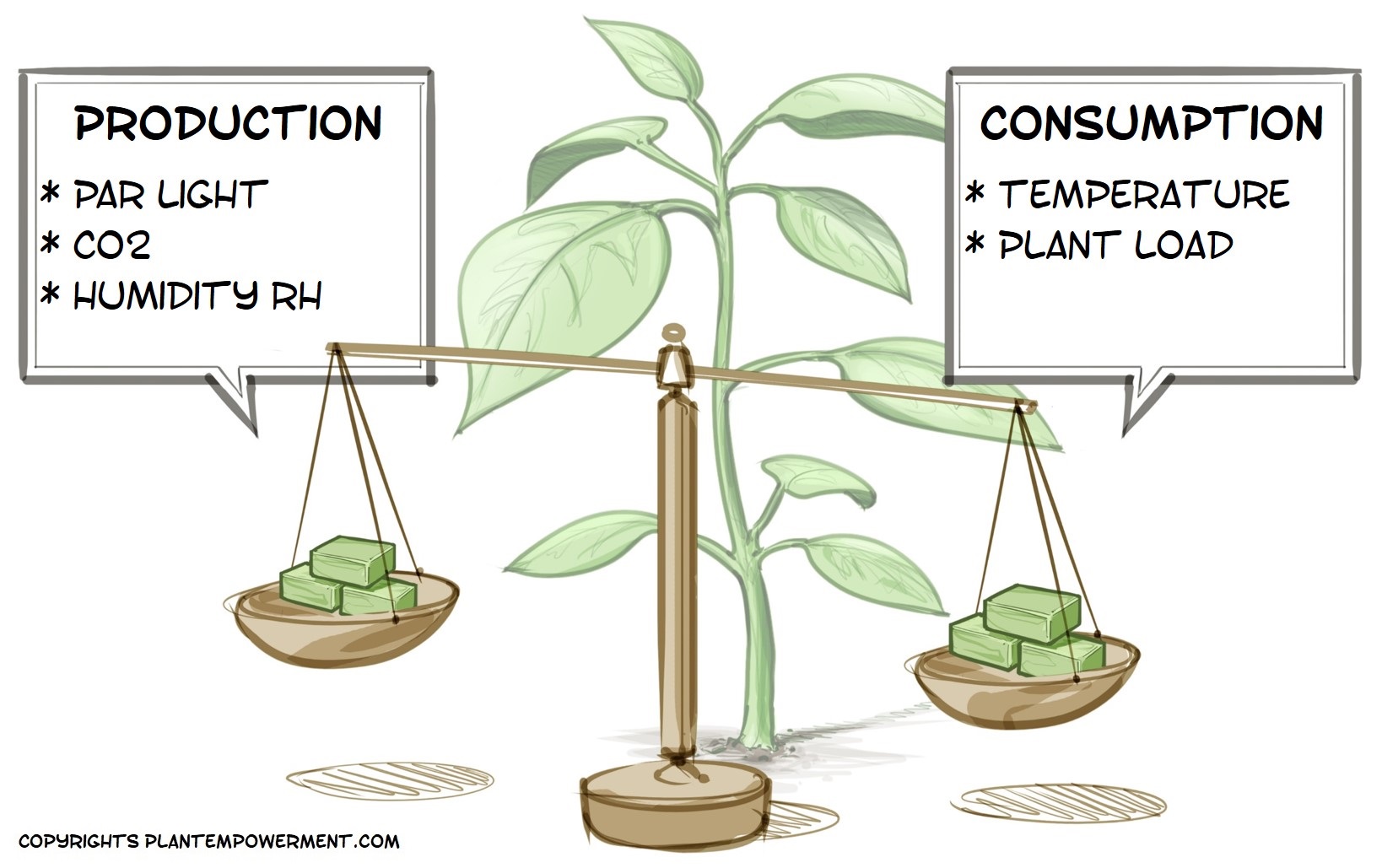 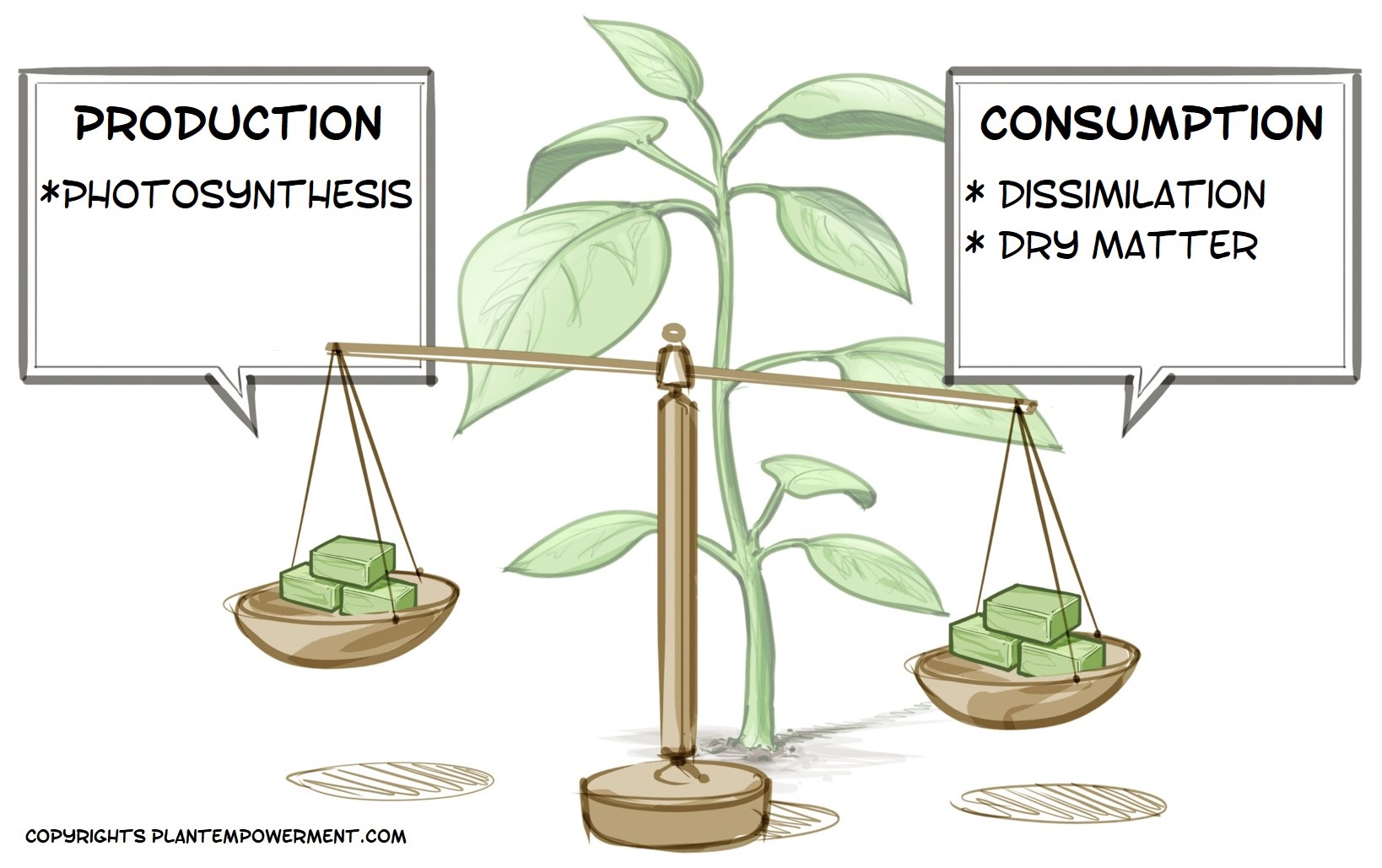 Empower plants through the assimilates balance

By finding the right balance of sugars created and sugars consumed, you can produce a more healthy and resilient crop while maximizing the plant’s use of available light.

This article is part of a series on the concept of Growing by Plant Empowerment (GPE), a global follow-up to a new Dutch growing method called Het Nieuwe Telen (HNT) also known as Next Generation Growing. GPE starts with the natural behaviour of plants, as they are capable of coping with very different circumstances and climate conditions. The plants keep themselves alive by managing three balances: energy, water and assimilates (refer to 2019 Greenhouse Canada Mar/Apr, June, and Oct). In this article, we will focus on balancing the production and consumption of assimilates and how this knowledge can be used to produce higher crop yield and quality.

Photosynthesis is the starting point for optimizing plant growth. In the process of photosynthesis, carbon dioxide (CO2) and water (H2O) are transformed into sugars or assimilates, with the help of energy from sunlight. These sugars can be used as building blocks for plant tissue production and to make new cells, for instance. The biochemical processes responsible for the production of new cells also need energy, which is indirectly supplied by sugars as well. So assimilates have two roles: building material and fuel for plant growth. The plant will always balance its consumption and production of assimilates, as shown in Figure 1. If there is an assimilate shortage, the plant has to cut down on consumption, at the cost of development or quality. Surpluses, however, mean inefficient utilization of available assimilates, which is also undesirable.

The article Empower plants through the assimilates balance was published originally in the magazine Greenhouse Canada in November 2019. 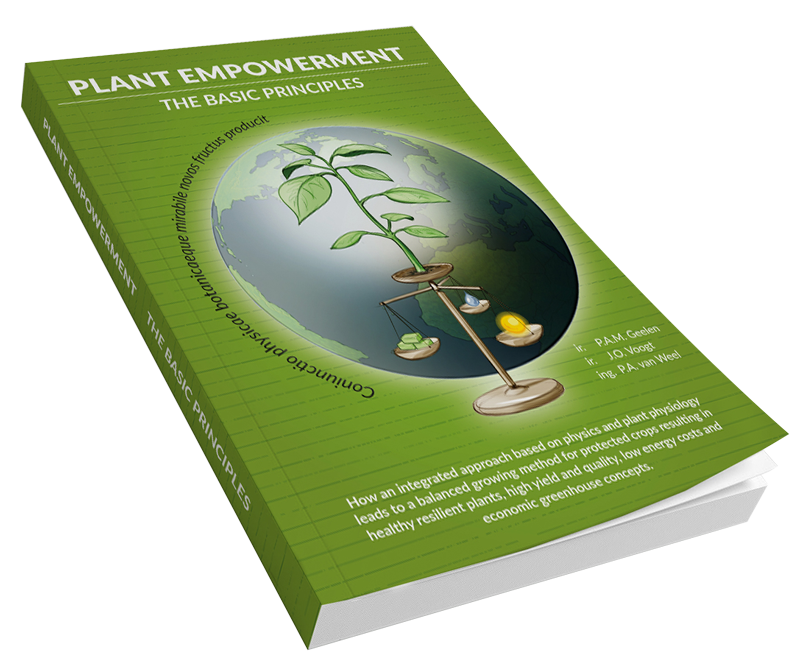